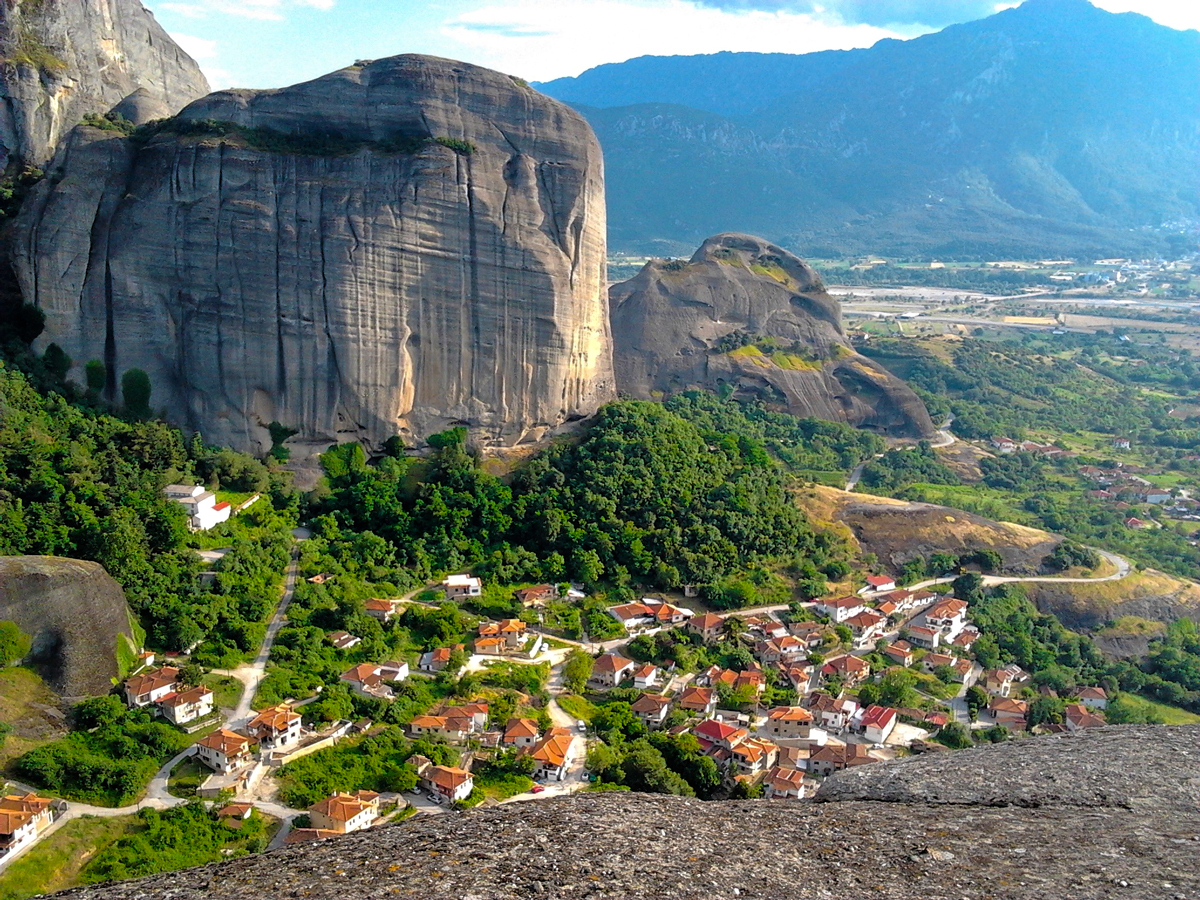 METEORA JOURNEY TO A HOLY LAND!

Meteora means ‘suspended in space’. Your first, second and third sight of these impossibly tall, vertical rocks will have you gasping in disbelief. But it’s not just the incredible geology that stretches your imagination. It’s the monasteries balanced on these pinnacles. How did they get there? The monks who built them were the original rock climbers, lifting the materials up with pulleys, nets and their bare hands.

Today, fans of the sport come to Meteora from the world over, to pit themselves against these gigantic rocks. Unesco has declared Meteora a World Heritage Site. The Greek state calls it a sacred spot, inviolate and immutable. You’ll no doubt come up with other adjectives to describe Meteora, this wonder of the world.

What to do in Meteora

Stone giants  and humble hermits
In Thessaly, a forest of mind-bending stone monoliths rises perpendicular to the flat valley north of Kalambaka, south of the Pindus Mountains. Monasticism here began in the 11th century with the first hermits arriving in Thessaly from Mount Athos to retreat to niches in these heavenly pillars. In the 14th century, the Blessed Athanasios of Meteora came to the area and founded the first monastic community in the monastery of the Great Meteoron. Other monks followed from other corners of Greece, creating a total of 20 monasteries.

Monastic eyries
At present there are six active, flourishing, restored monasteries and convents, which welcome each visitor hospitably to their lofty realms. These are Agios Nikolaos Anapafsa, Metamorphosis tou Sotiros or Megalou Meteorou, Varlaam, Roussanos, Agia Triada and Agios Stephanos. All the others, whether restored or abandoned, are empty.

A place for rock climbing enthusiasts
From the earliest days of the monasteries, rockclimbing was a necessity, not a sport. There was no other way to get to the top except by using ropes, nets, bare hands or long rickety ladders. Nowadays, the challenges of these divine columns attract climbers from all over. They enjoy the classic rock-climbing routes, often without excessive safety precautions. All the routes have been cut in the traditional way from down up. To the eyes of the initiated they look impossible, some going virtually straight up to a height of 500m.

Kastraki, a village nestled among the rocks
By far the prettiest village in the area, Kastraki fits snugly at the base of the giant rocks and welcomes climbers, who can take their pick of cozy hotels, rooms in private houses and camping sites, tavernas and shops. Palio (Old) Kastraki has been declared a protected traditional settlement.

Kalambaka: the gateway to the higher realm
Kalambaka opens the door to Meteora. The commercial and tourist hub of the region, it has lots of hotels, rooms to let and good restaurants – all the makings of a dreamy holiday. Take a stroll in the old part of town, called Spotos, which has been given a tasteful facelift. Don’t miss Greece’s only woodworking school here and a traditional foundry, where you’ll find rare hand-crafted bronzeware.

The multi-arched bridge of Sarakina
Heading from Kalambaka towards Trikala, you’ll come to the historic hamlet of Sarakina 8km outside town. It’s worth the trip to see the largest stone bridge in Trikala prefecture, a  famous six-arched edifice, which went up in the 16th century. It is one of the most interesting attractions in the area.

The Theopetra Cave
Just 4km outside Kalambaka, another surprising sight awaits you in the shape of an enormous cave, whose main chamber measures about 500 sq. m. Scientists calculate that the formation of the limestone Theopetra (or god-rock) Cave occurred during the late Cretaceous period, 137 million to 60 million years ago. It was inhabited as early as 50,000 years ago.

We are here for you

Need help or more information on your next trip? Do not hesitate to contact us!

You can find out more about which cookies we are using or switch them off in settings.

This website uses cookies so that we can provide you with the best user experience possible. Cookie information is stored in your browser and performs functions such as recognising you when you return to our website and helping our team to understand which sections of the website you find most interesting and useful.

Strictly Necessary Cookie should be enabled at all times so that we can save your preferences for cookie settings.

If you disable this cookie, we will not be able to save your preferences. This means that every time you visit this website you will need to enable or disable cookies again.